XXI. OF THE AUTHORITY OF GENERAL COUNCILS 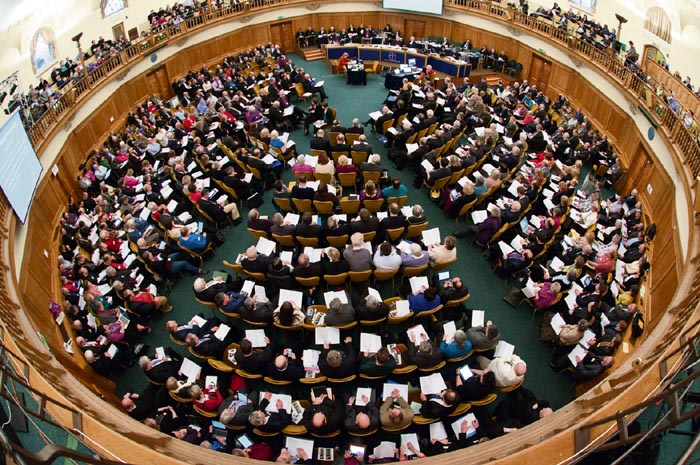 GENERAL Councils may not be gathered together without the commandment and will of Princes. And when they be gathered together, (forasmuch as they be an assembly of men, whereof all be not governed with the Spirit and Word of God,) they may err, and sometimes have erred, even in things pertaining unto God. Wherefore things ordained by them as necessary to salvation have neither strength nor authority, unless it may be declared that they be taken out of holy Scripture.

Every week for twenty weeks I felt able to reflect and write about the Articles of Religion.  Then I found myself faced with the General Councils, and was utterly stuck.

Churches, like all organisations – even the Body of Christ here on earth – need some sort of official discernment process, and the General Council appears to have been the initial place for this happen.  There is a surprising dearth of easily accessible information about this historic body, however, from where I stand I think that a similar role is now taken by General Synod (and before that the Church Assembly).

Although I sit on Deanery Synod, I do not sit on either Diocesan or General Synod, and therefore found myself somewhat at a loss to comment on it, until I realised that was my reflection point.  What does General Synod do?  What power does it hold?  What can it implement?  And if I don’t know, how many more Anglicans out there are in the same position?   And what does that mean that it could be almost meaningless to most Anglicans unless something is voted on which directly affects them?

We live in a world which is more transparent than ever, since now I can (and have) watched sessions of General Synod being live-streamed on the internet, and there is some information about it on the CofE website (https://www.churchofengland.org/about/leadership-and-governance/about-general-synod) but it remains, to me at least, a slightly odd way to govern an institution.

I feel that the structure of the three Houses (Bishops, Clergy, and Laity) reflects the unconscious on-going Reformation nature of the Church of England; that the priesthood of all believers allows for every member to have the right to challenge those with more ecclesiastical power to either ensure change or prevent it.  It is a conundrum – it has the appearance of democracy (Clergy and Laity must stand and be elected to Synod, and then they vote on measures and budgets), but the Church of England is not a democracy.  For example, a parish congregation cannot elect nor have a say on who is appointed as their next Vicar, or indeed the next Archbishop or Supreme Governor.

One flaw that struck me was about how often General Synod meets: if key debates are only held three times a year, it is also reflects the glacial speed at which the Church can respond to important issues.

The Article points to another potential flaw: “they may err”.  Synods are made up of people, and people make mistakes.  This is why Article XXI makes returning to Scripture part of its remedy once more.  This is well and good, but anyone who has kept up to date with any of the major recent debates will know, Scripture can be used on both sides and requires study, interpretation and placing within the whole meta-narrative of God’s story of salvation.  And some of the modern ethical issues aren’t mentioned in the Bible at all – we must draw out our decisions by means other than proof-texting.

The Article is right in suggesting that what comes out of such committees and synods may be good and helpful, or lacking strength and authority.  That is why we keep testing to check that it is in line with God’s will.

GOD, who as at this time didst teach the hearts of thy faithful people,
by the sending to them the light of thy Holy Spirit;
Grant us by the same Spirit to have a right judgement in all things,
and evermore to rejoice in his holy comfort;
through the merits of Christ Jesus our Saviour, who liveth and reigneth with thee,
in the unity of the same Spirit, one God, world without end. Amen

The Collect for Whitsunday, Book of Common Prayer